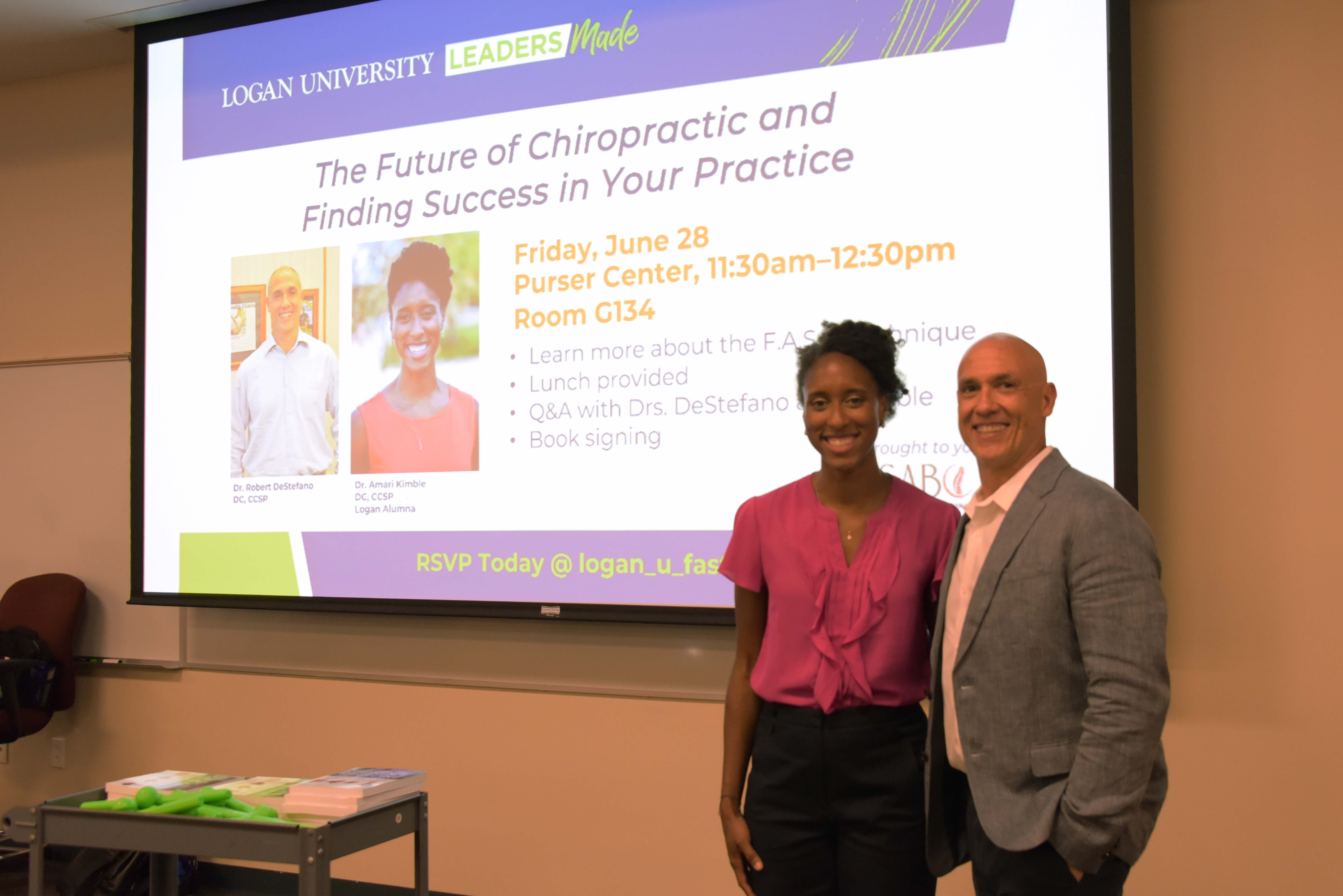 The Future of Chiropractic and Finding Success in Your Practice

“Remember that you have so much power in your hands, and there are so many opportunities within our field right now. Logan is really preparing you for life outside this little bubble, so make sure to use the resources that you’ve been given.”

Those were the words of recent graduate Amari Kimble DC, CCSP (2018) who is now practicing alongside Robert DeStefano DC, CCSP of DeStefano Chiropractic and Associates in New York.

The two were invited to campus June 28 by the Student American Black Chiropractic Association to discuss the future of the chiropractic profession and how to find success in practice. Logan students, faculty and staff were in attendance.

Dr. DeStefano has been the team chiropractor for the New York Giants for 19 seasons. He is an expert in helping prevent and treat joint and muscle injuries and is known for developing manual, self-treatment technique called Facilitated Active Stretch Technique (F.A.S.T.), which is used in combination with chiropractic care by professional athletes and the general public.

During the presentation, Dr. DeStefano offered insight into how students should present themselves as chiropractors as well as the value of associating with other professionals to establish an equal playing field.

“I’ve had people tell me that they ‘believe in chiropractic’ the same way they would say they believe in the Easter bunny,” he said. “Sometimes in conversations, you have to present all your knowledge first, then drop the bomb on them by letting them know you’re a chiropractor. As long as you talk to other professionals as equals, they’ll get it.”

Dr. DeStefano has been in practice for more than 30 years. He is certified in the Active Release Technique (A.R.T.) and has led more than 100 seminars on A.R.T. He has also worked with Olympic athletes on all levels as well as athletes in the NHL, NBA, LPGA and MLB.

He reminded the Logan community to not be afraid of making yourself stand out from the crowd. “If you can master the art of manipulation and focus on hands-on, manual work,” he said, “you’ll differentiate yourself from every other chiropractic out there, and that’s what will help you become successful.”