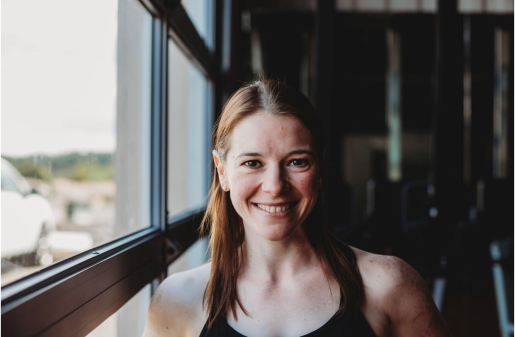 As a fitness program specialist for the U.S. Army at Fort Carson Military Base in Fort Carson, Colorado, Beth Bearden, MS (’20), CSCS, TSAC-F, CES has taken her career to a new stage – literally.

Beth received her Bachelor of Arts in Acting and Directing from the University of Houston and went on to become a musical theatre actor for 15 years. At that time, her acting career started to overlap with her fitness career as she began to make a more concerted effort to learn about fitness and also began to educate and train her fellow actors.

“I went through my own journey when I had changed my diet for theatre, and it made me want to broaden my knowledge of health, fitness and sports science,” Beth said. “It’s been a passion project that started 12 years ago, and many certifications and degrees later, it has culminated with training people in military.”

Now, Beth works with the Fort Carson Morale, Welfare and Recreation (MWR) division of the U.S Army to create one-on-one and group programming to rehabilitate and train Army members in every specialty as if they were being deployed.

“As someone in the health and fitness industry, all you want to do is help improve someone else’s quality of life,” she said. “Well, I’m not only improving these soldiers’ quality life, but I’m also helping them be safe while they serve and protect our country.”

Beth attributes her inspiration for wanting to work with the military to her husband, an Army reserve member, whom she helped with fitness before moving into her current role.

“Since the Army reserves are only part-time soldiers, they don’t have the same fitness supports that the regular Army has,” Beth said. “I hope that once I have more experience, I can expand into nonprofit work with Army reserves.”

When Beth pursued her Master of Science in Sports Science & Rehabilitation (MS-SSR) from Logan, she was able to explore a new element to fitness: rehabilitation. She sees many soldiers with chronic pain or injury and feels she can better serve them because of her background in sports science.

“Logan has helped put all of this work that I’ve done together. The program filled in all the gaps I felt I was missing and made me feel like a well-rounded, confident professional in this industry,” she said.

Working with the Army has also shown Beth the camaraderie that comes with training as a group. She has seen soldiers build trust with their unit while taking lifting, high-intensity interval training, or circuit training classes, which is imperative for their skills on the battlefield if they are deployed.

“Seeing the satisfaction in a soldier’s face and how proud they are after going through a workout together makes my job worth every second,” Beth said. “I can do this for the rest of my life because I’m not just contributing to my own growth but to a company of soldiers who can feel confident in themselves and each other.”