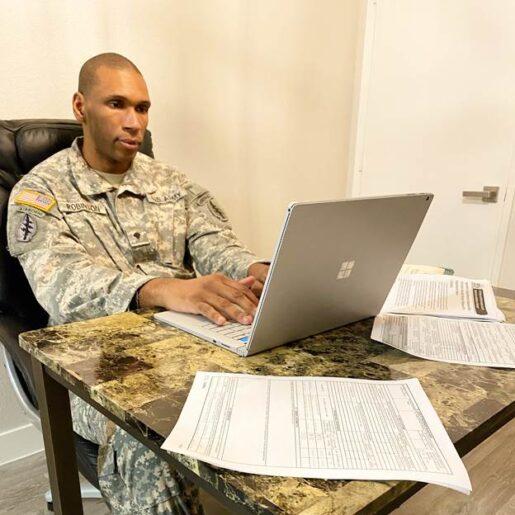 For James Robinson, Logan University’s Bachelor of Science in Human Biology (BSHB) program presented a path for him to achieve his dream of becoming a physician.

James was a specialist in the United States Army’s 3rd Special Forces Group stationed at Fort Bragg, North Carolina, from 2006 to 2010. After he was disabled during combat while deployed in Afghanistan, he served in the U.S. Army Reserve until 2014. When he started working at the Veterans Affairs (VA) Southern Nevada Healthcare System as an advanced medical support assistant and intermediate care technician, he realized he wanted to study medicine.

“My goal is to be a neurosurgeon or psychiatrist so I can help underserved communities of color as well as my fellow veterans,” James said. “I want to work for an academic medical facility in a diverse city while also working for the VA health care system.”

Before he could apply to medical school, James knew he needed to obtain a bachelor’s degree in a relevant field. Logan’s nationally recognized BSHB program turned out to be the perfect fit. Designed to build the foundation for students to excel in a variety of scientific and health care fields and offered online or on campus, the program included all of the courses James needed for admission to medical school.

“It’s been very convenient for me to take all of my classes online, as it has allowed me to continue my employment with the VA Southern Nevada Healthcare System,” James said.

Currently a trimester 9 student graduating in April 2021, James has also appreciated all of the support he has received from the Logan community.

“My experiences have been wonderful with some of the most compassionate and understanding professors that I have encountered,” James said. “They have been amazing while I have had to deal with undergoing gastric bypass surgery, medication changes and injuries from my time on active duty as well as deployment.”

James has already been accepted to numerous medical schools, including institutions outside of the United States. He has also received a $40,000 scholarship from the American Australian Association to study in Australia.

“I’ve used my education from Logan to not only be accepted to medical schools, but also to land large scholarships to travel and learn abroad,” James said.

Although he has not yet decided where he will attend medical school, James is looking forward to his future career in medicine.

“I think that my experiences in the military, working in health care and my BSHB degree from Logan have given me the perfect foundation to become a competent physician,” James said.

If you’re interested in a career in the health care or science workforce or entering a graduate program in medicine, osteopathy, podiatry, chiropractic, pharmacy, optometry or dentistry, explore Logan’s BSHB program here.