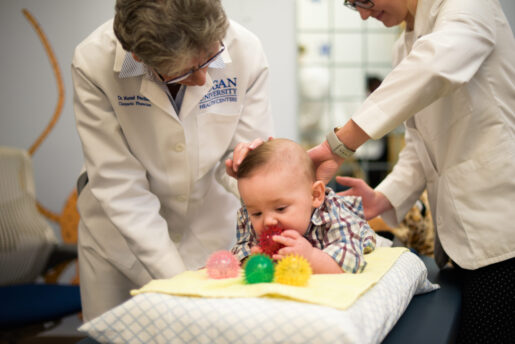 *This story first appeared in the spring 2019 issue of The Tower.

Blake spent his first eight days in the neonatal intensive care unit on a feeding tube. He experienced severe acid reflux, causing him to spit up profusely every 20 minutes. His eyes failed to track movement, and he had trouble with simple things, such as turning his head or grabbing for objects.

“He was miserable,” said his mom, Ashleigh Boyd of O’Fallon, Missouri. “He wasn’t sleeping and he just wasn’t responding in ways he should.”

Ashleigh was especially attuned to Blake’s care, as she is an emergency room and intensive care unit nurse. She took advantage of her access to resources, experts and clinical data, “but I wasn’t finding any answers as to what was going on with Blake and how we could help him,” she said.

Some suggested that Ashleigh have Blake evaluated by physical and occupational therapists. But it was Ashleigh’s CrossFit instructor who set her on a path. The instructor told her about Logan University, Muriel Périllat, DC, MS and her specialized work in pediatric chiropractic.

Ashleigh said she was open to conservative care and finding a more holistic approach for her son. Still, she was wary.

“Going in, I was really nervous,” she said, “but after meeting Dr. Périllat, I found that she was wonderful and her demeanor was amazing. I trusted her because of the way she explained things and how she communicated with Blake. She talked to him like a human, and she took action that first day.”

Ashleigh learned that in the case of her son, chiropractic was not about making adjustments, but rather altering his neurological communication system through craniosacral therapy. This approach uses a gentle touch and manipulation to relieve pain and dysfunction. During the first appointment, Ashleigh began to see immediate changes. Blake’s fists, which had been closed tightly for months, opened for the first time. His body, which had been stiff and rigid, began to ease. “I was able to put him in his car seat, and it was the first time he didn’t have a blood-curdling cry,” she said.

Over the next few weeks, Ashleigh and her husband took notice of other improvements in Blake’s health and well-being―his appetite increased, his acid reflux went away, he was able to turn his head both ways and grasp objects with his hands.

As Blake’s condition improved, his appointments decreased from three times a week to once a week. Now, at 7 months old, Blake sees Dr. Périllat every three weeks for approximately 15 minutes.

“I think there’s a misconception among people about chiropractic,” Ashleigh said. “They think it is about cracking and snapping bones, but they don’t realize how the neurological function communicates with the body. Life has been a lot easier knowing this is an option.”

Ashleigh chokes up as she talks about the effect Dr. Périllat and chiropractic care has had on her infant son. She now feels that she can be a voice for others. “Being a health professional for 15 years, I had never seen or heard anything like what we saw in Blake. I can tell you it was scary,” she said. “I’ve always been an advocate for continuing education. Having been through this, I think there needs to be more public awareness, so more lives can be touched and quality of life can be improved.”