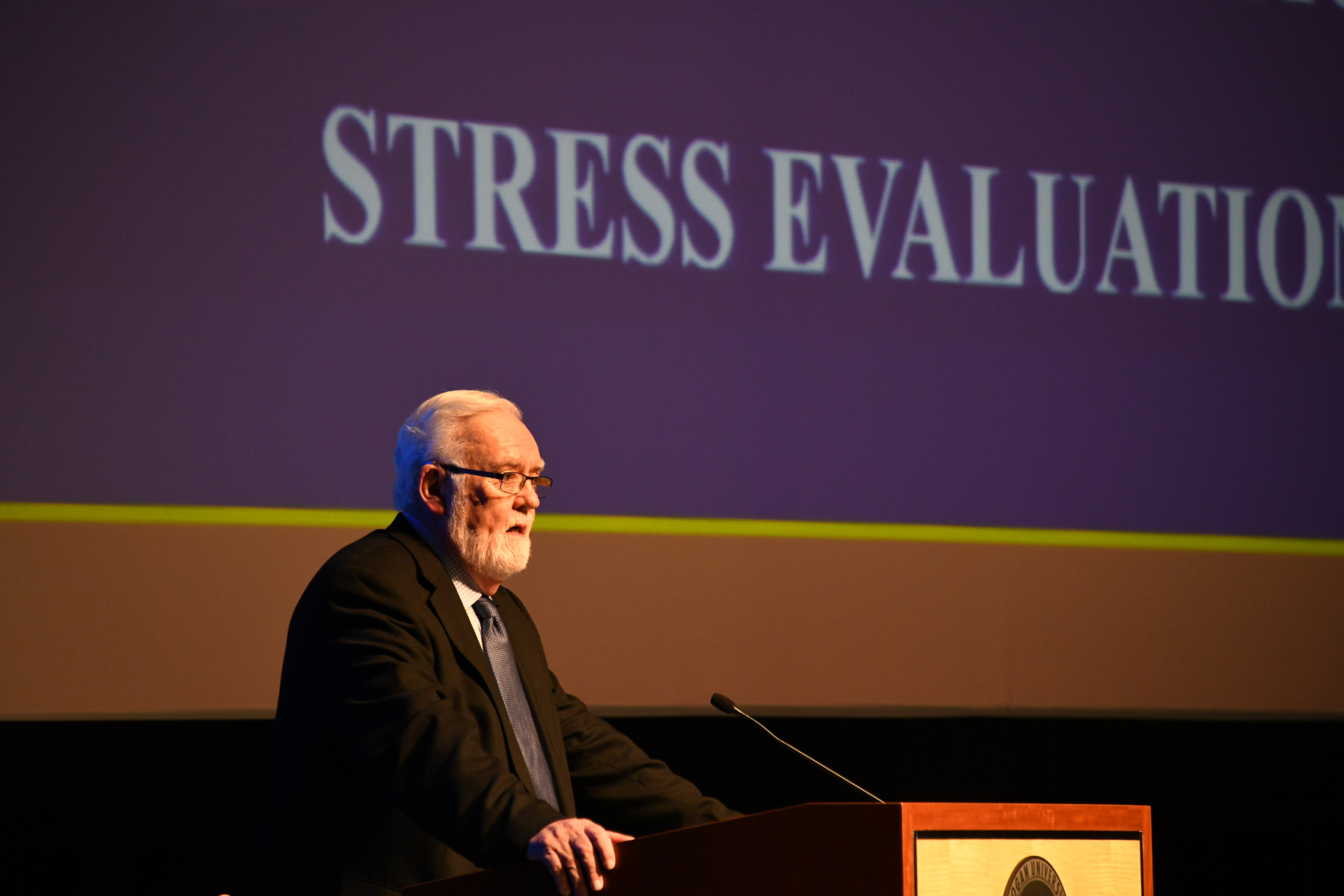 The Life and Career of Dr. Howard Loomis Jr.

Howard F. Loomis Jr., DC, FIACA, (1967) reflected upon his lifelong love for learning as well as his relationship with Logan during the University’s recent Spring Symposium.

A pioneer and innovative leader in the understanding of human nutrition and enzymes, Dr. Loomis has made a tremendous impact on health care. Most notably, he developed a system for identifying nutritional deficiencies and stresses on the body.

Today, he serves as president and director of Food Enzyme Institute, which educates thousands of health care professionals on the value of diet and nutrition in maintaining optimal health. He’s passionate about sharing his knowledge with others and staying at the forefront of health care.

Before an eager crowd of attendees, Dr. Loomis addressed his own continuing education process, noting that the purpose of chiropractic educators is not to make a student a healer, but to impart knowledge so a student can pass exams and become licensed to practice applying that knowledge.

“Each of you is an artist that brings your education, individual talents and compassion together to heal your patient,” he said. “Remember that regardless of the decade in which you were educated, basic anatomy, physiology and neurology do not change.”

Dr. Loomis’ story begins in June 1937, several months before he was born. His mother, a registered nurse, brought her mother who was experiencing heart and lung problems to see a specialist.

“After the exam, while my grandmother was getting dressed, the doctor wrote a note and handed it to my mother,” he said. “It said, ‘She may drop dead any minute.’ Imagine being five months pregnant and being handed that note. That scene was told a few times as I grew up.”

On the way home, they passed a two-story white frame home on a corner lot with a well-groomed green lawn. “The sign on the lawn simply read ‘Dr. Griffith, Chiropractor.’ No one in my family had ever been to a chiropractor, and certainly not an RN in 1937. But my mother was very resourceful,” he said.

The fact that Dr. Loomis’ grandmother would live for another 11 years―long enough for him to have fond memories of her―had a profound impact on Dr. Loomis.

His second encounter with chiropractic wouldn’t occur until 1948 when back pain stemming from a car accident forced Dr. Loomis’ father to quit his job as a baker. His father pursued a second career as a chiropractor, bringing his family to Logan Chiropractic College in St. Louis.

After moving back to Buffalo, New York, so his father could practice, Dr. Loomis returned to St. Louis for a brief trip. A chance visit to Logan resulted in him enrolling in classes to become a chiropractor.

The next few decades would bring many milestones and life-defining moments. In the late 1960s, Logan President Dr. William Coggins led efforts to purchase a new campus in Chesterfield. “I still take pride in the fact that I, and many other alumni, were able to contribute toward the purchase,” Dr. Loomis said. “I experience a renewed sense of that that every time I revisit the campus and proceed up D.P. Casey Drive.”

By the 1980s, Dr. Loomis’ career took on a new direction. He was asked to conduct clinical outcome studies in the use of food enzymes for health care professionals. After five years of research, he began lecturing internationally, ultimately selling his practice and moving to Madison, Wisconsin to open his own supplement company, which later became certified by the State of Wisconsin Educational Approval Board as an educational institution―a proud moment of his career.

Over the years, Dr. Loomis has remained an advocate for chiropractic and supporter of Logan. In the early 2000s, he donated funds to help construct an amphitheater as part of the William D. Purser Center. More recently, he has provided the funds to establish the Howard F. Loomis Jr., DC Endowed Chair of the Viscero-Somatic Center at Logan.

“The only constant in this world is change,” he said. “While our knowledge base of the functions of the human body continues to greatly expand, the basic sciences of anatomy, physiology and neurology will not change during your career. Continue your personal education and grow.”