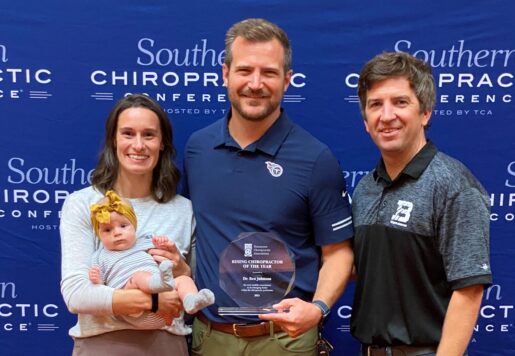 Ben Johnson, DC (’11), MS (’11), ICCSP of Nashville, Tennessee, has been named Rising Chiropractor of the Year by the Tennessee Chiropractic Association (TCA), the state’s largest professional organization for chiropractors.  This peer-nominated award is presented to a Tennessee chiropractic physician who has contributed generously of their time and talent, early in their career, to their profession and their community.

“It is a great pleasure to present this award to Dr. Johnson on behalf of the association for his outstanding early achievements, as well as his promising future leadership,” Tiffany Stevens, executive director of the TCA, said.  “From his local involvement to the national stage, the passion he has for his work and his exceptional professionalism have made him a standout member of Tennessee’s chiropractic community.”

Originally from Memphis, Dr. Johnson attended the University of Tennessee-Knoxville where he earned his Bachelor’s degree in Biochemistry, Cellular, and Molecular Biology. Following his undergraduate studies, Dr. Johnson attended Logan University where he earned his Doctorate of Chiropractic and Master of Science in Sports Science and Rehabilitation in 2011.

Dr. Johnson returned to Tennessee to begin practicing in 2012 and joined the TCA in support of his profession.  He opened Nashville Chiropractic in the growing Gulch area of Music City in 2015 with his wife, Lauren Johnson, DC (’13), MS.  There, they work together as their community’s go-to providers for musculoskeletal pain, family health, and athletic injuries.  They make an incredible team in practice and in supporting the TCA through their membership and involvement in advocacy efforts.

Dr. Johnson represents the profession to the highest degree, not only for his patients in the practice, but also in his role as team chiropractor for the hard-hitting Tennessee Titans. Additionally, he has treating relationships with the Nashville Sounds and several universities.  A lifelong athlete himself, member of the Professional Football Chiropractic Society, and a Certified Chiropractic Sports Physician, his personal experiences and training enhance his ability to provide the best possible results for all of his patients.

Along with the rewarding work of patient care and community involvement, he loves spending time with Dr. Lauren, their beautiful baby girl, Elin, and their dog, Remi.

Dr. Johnson accepted the award at a special presentation during the Southern Chiropractic Conference® hosted by TCA on August 22, 2021, in Murfreesboro, Tennessee.  This annual event offers clinical education sessions on topics impacting chiropractic and health care in Tennessee.