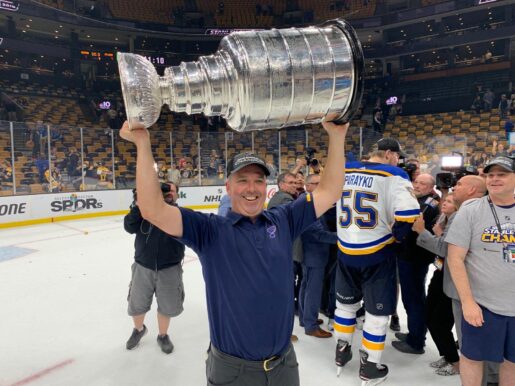 It took several days for Mike Murphy, DC (’95) to get through the 500 texts he received after the St. Louis Blues clinched the Stanley Cup for the first time in franchise history in summer 2019.

For the past 22 years, Dr. Murphy has served as the official chiropractor for the St. Louis hockey team. He admits that June 12, 2019, “was a pretty surreal moment” of his career.

“We’ve come close a few times, but in order to win the Stanley Cup, a lot of things have to go your way … good players, staying healthy and, of course, winning 16 games in the playoffs. It all just came together this year.”

Dr. Murphy was just two years out of Logan when then-Blues hockey player Kelly Chase came to him with a rib injury. “During my time treating Kelly, I asked if I could talk to his trainer about the injury. When I did, the trainer said he appreciated that phone call,” Dr. Murphy said. “He then followed up with another player who had a back injury and asked me to take a look.”

That was the beginning of Dr. Murphy’s long-standing relationship with the Blues. He doesn’t remember when his position became official … he just started providing more chiropractic care, traveling with the team and eventually earning the trust and friendship of the trainers, coaches and players.

Having played hockey during college in Canada, his knowledge of the sport helped him understand and anticipate players’ injuries. He also received great preparation treating countless professional athletes as the official team chiropractor for the St. Louis Rams as well as the St. Louis Athletica Women’s Professional Soccer. While Blues players’ injuries increased and intensified over time, the basics of Dr. Murphy’s care remained the same, and he always believed in an integrated approach to taking care of an athlete.

“I love how our medical team works together,” he said. “We all know each other’s strengths and what we bring to the table, and we’re in constant communication with each other. Just as the players all have their positions and plays on the ice, so do we, and that’s a benefit to the team.”

Those tight-knit connections were critical during the playoffs when the team traveled all over the country. During this hectic time, Dr. Murphy continued treating patients at his practice, Performance Chiropractic, in Chesterfield, Missouri, often working an 8-hour shift after returning home from a game at 3 a.m.

“I think what makes the win so cool is getting to share it with all the people who work hard on the team, from the management and coaches to the business office, equipment staff and media staff,” he said. “When you’re traveling with these people on planes and eating dinners together, the team’s success is really everyone’s success.”