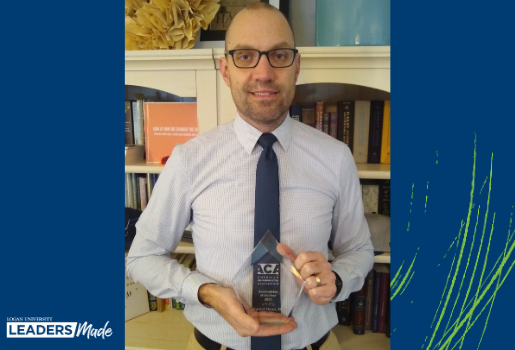 For Daniel Haun, DC (’04), DACBR, earning American Chiropractic Association’s 2021 Academician of the Year Award was something he never saw coming. But even days after receiving the news, he is still surprised. “I remember getting the message from the ACA and I thought they were calling about something to do with giving a lecture,” he said. “But when they said I was the recipient, I was floored. I don’t think it’s sunk in fully. It is quite an honor just to be considered.”

Dr. Haun started in academia at Logan in 2009, after earning his Doctor of Chiropractic and completing both a residency and fellowship in radiology under Norman Kettner, DC, DACBR, FICC. Dr. Haun’s love for learning and “staying in the literature” was a large factor in entering the teaching field. Today, as director of resident & fellow education, he says his students are his motivation for continuing the journey.

“Their thirst for knowledge is so inspiring,” he said. “I like to think of myself as a guide and mentor through the sea of information that exists. It’s a bit different from when I went through the program. The internet was just barely coming into its heyday. Now students have access to so much information; it can be helpful and overwhelming. Gone are the days when faculty are the sole provider of information, so I love being able to help students navigate all of that.”

Dr. Haun is the fourth Logan faculty member to receive the prestigious Academician of the Year Award, which recognizes an individual for efforts in advancing the profession through academic or educational excellence. He follows 2005 recipient Norman Kettner, DC (’79), DACBR, FICC; 2016 recipient Patrick Montgomery, DC (’76), MS (’15), FASA, FICC; and 2020 recipient Kristina Petrocco-Napuli, DC, MS, FICC, FACC – all of whom Dr. Haun says have had a meaningful impact on his life and career.

“During the most challenging times of my life, I’ve seen such strong support by my Logan family,” he said. “Along with that support, there are people who have believed in me, pushed me harder and inspired me, like Dr. Kettner. He has influenced me as a student, fellow and now a mentor in my academic career. I look up to him and strive to be like him every day from a professional standpoint.”

Dr. Haun said he is also humbled by recognition received from Logan students, who twice honored Dr. Haun with the Outstanding Faculty Award in fall and winter of 2017.

“That was very meaningful to me because I like to think that I have an impact on students as they go into practice, which in turn has an impact on the patients,” he said. “It may be cliché to say, but the ACA award truly represents a team effort, and I couldn’t have done it without the support of this institution and key people along the way.”