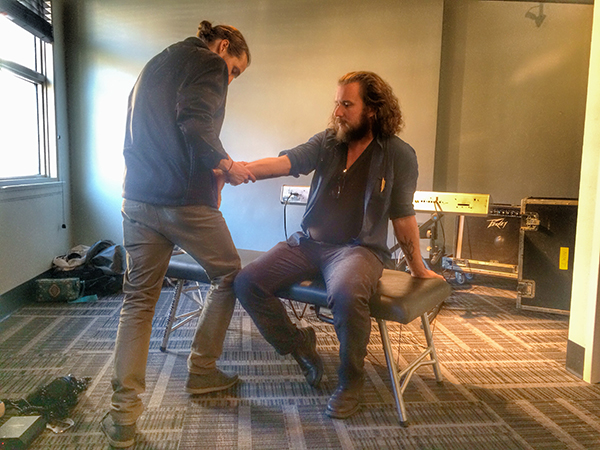 Bringing Chiropractic to Center Stage in the Music Industry

It’s widely accepted that sports and chiropractic go hand in hand, but there’s a less obvious connection to the music industry that December 2012 Logan graduate Charles Kautz, DC, is working to establish. Dr. Kautz has taken his love for music and transformed it into a career in which he has provided chiropractic care to members of some of the biggest touring acts in the industry, including Taylor Swift, Billy Idol, The Flaming Lips and Umphrey’s McGee.

Providing treatment to those in the music industry wasn’t always a focus for Dr. Kautz, but he had a career-defining moment midway through his DC education at Logan.

“It was finals week, so naturally, I was procrastinating and thinking about anything else but studying,” said Dr. Kautz. “While I was in the library, I literally had a ‘lightbulb moment,’ just like you’d see in cartoons.” It was at that moment that he decided he’d make being the “musician’s physician” his niche.

Since he was young, Dr. Kautz’s hobby was music. He frequented concerts while attending college at the University of Kentucky and throughout his time at Logan. “The Pageant on Delmar claimed all my leftover spending money as a chiropractic student,” joked Dr. Kautz, recounting his memories with a group of about 20 other Logan students who shared a passion for music. “I fell in love with the vibe in The Loop and the music scene in St. Louis.”

Dr. Kautz took this love for music and began digging deeper into how musicians could benefit from chiropractic care. He found that, while they experienced chronic pain from repetitive stress injuries, no one was specializing in chiropractic for musicians full-time or to the extent he was considering. “Musicians work hard, and they’re all doing repetitive motions all the time,” he said. “I view chiropractic as a way to give these touring musicians an edge, to enhance their performance and allow their bodies to create the music that their brains are intending.”

“Logan was a great choice, because they are so diverse in their offerings,” he said, adding that he and his supervising clinician, Assistant Professor Jeffrey Kamper, DC, DCBCN, often discussed music and Dr. Kautz’s plans for his future. “Since then, I have been working to bridge the gap between music and chiropractic—to really introduce one industry to the other.”

The individual he claims as his gateway to treating those involved with larger musical acts, is John Densmore, legendary drummer for The Doors. “He explained to me that chiropractic pretty much saved his career and that the band would bring a chiropractor to treat them at the venue every week on tour.” said Dr. Kautz.

Working with John early in his career gave credit to the work Dr. Kautz was doing and helped pave the way for his future relationships.

Decreasing his patients’ pain and improving their function is Dr. Kautz’s number one goal. “If they feel better, they’re going to play better,” said Dr. Kautz. “To have them walk off the stage and say, ‘thank you,’ to me is so rewarding.”