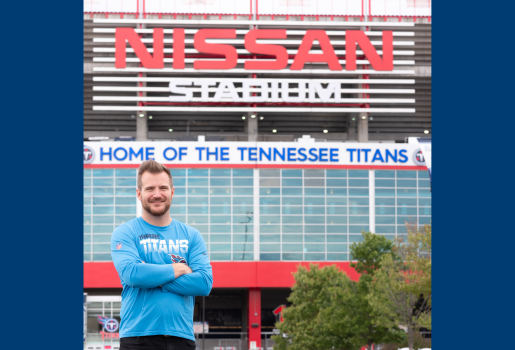 A sea of silver and blue engulfs Nissan Stadium in Nashville, Tennessee. The smell of freshly cut grass fills the air. While on-field warm-ups take place, sideline reporters give pre-game updates. Coaches review playbooks. Referees prepare for the coin toss. In the locker room, Ben Johnson, DC (’11), MS (’11), ICCSP adjusts the world’s best football players to ensure they are at peak mobility for the many hits they will soon dodge.

It’s game day. Or for Dr. Johnson, it’s a typical Sunday as the team chiropractor for the Tennessee Titans of the National Football League (NFL).

Dr. Johnson evaluates and treats players while working in a collaborative setting with trainers, the team’s medical director and other physicians. He works closely with the Titans’ head athletic trainer on reporting player conditions, making diagnoses and recommending treatment. In addition to providing on-site support at every game, he works with players at the Titans’ training facility twice a week.

“Since I was a kid, I wanted to be a doctor, I just was unsure what kind,” he says. “A friend’s brother, who is an MD, suggested I become a chiropractor knowing my athletic background and my drive to serve in the medical field. Cheerleading at the University of Tennessee, I hurt my back and saw our team chiropractor. I saw how he worked with sports teams, which drew my interest even more, so I followed that route with an opportunity at Logan.”

Connections to the Nashville sporting world helped Dr. Johnson get to the NFL. He’s worked with athletes from Belmont University as well as players from Nashville’s Triple-A baseball team. Through these relationships, he was recommended to the Titans to fill their team chiropractor opening, and he officially started with the team in June 2019. He also operates Nashville Chiropractic with his wife, Lauren Johnson, DC (’13), MS.

Dr. Johnson’s role is so important in the grand scheme of keeping his players healthy and ensuring a trustworthy environment among all medical staff. “If I evaluate a player, or if they present a problem to me, it’s my job to present that information to the trainers so everyone is on the same page prior to making a diagnosis or any further treatment recommendations,” he says. “Too often, I hear stories where a chiropractor goes into a team position, then tries to fly solo. Either intentionally or unintentionally, they end up undermining the other staff involved, causing all sorts of problems. If you respect the process and the others involved, the staff will show you respect.”

A common injury he often sees is the irritation of the sacroiliac joint. “When a player lands on their hip or on one side of their back, they are exposed to many unilateral forces,” he explains. “A quick response to these impacts is very useful for the athlete to manage his symptoms and get back on the field as fast as possible.”

Dr. Johnson believes his Logan education fully prepared him to work in pro sports. “Logan gave me the tools to be able to do what I’m doing, both with the Titans and in private practice,” he says. “At Logan, I learned how to provide high-quality, evidence-informed treatment options, which has helped me to expand my chiropractic tool belt.”

He is also thankful for the school’s collegiate sports partnerships, like the relationship with the University of Missouri athletics department and other local sports teams, where Dr. Johnson was able to see firsthand examples of how chiropractors can fit into the sports community. Those experiences all provided Dr. Johnson with knowledge and skills to work with the Titans. “It’s exciting to learn more from the medical team I am working with, experience other cities and stadiums, and meet the other team chiropractors and hear their stories.”