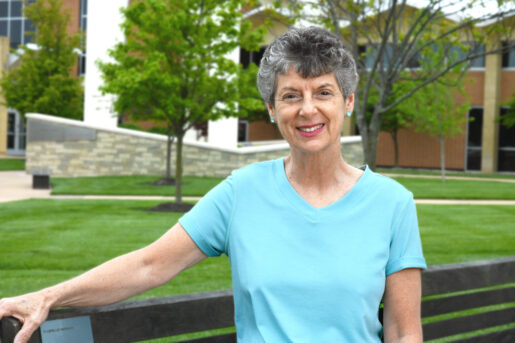 Laurie Burke, DC (‘82), CCSP, DABCA set up her practice in west county St. Louis the first weekday after she graduated from Logan University.

While her location and her passion for chiropractic haven’t changed in the last 38 years, Dr. Burke has added some new tools to her arsenal, completing her acupuncture diplomate certificate after three years of study in 2016 through the American Chiropractic Association. “Acupuncture opened my eyes to a different way of healing,” she said. “It can treat a variety of disorders, including depression, menstrual irregularities, musculoskeletal problems, vertigo, Bell’s palsy, shingles and bedwetting.”

She’s also found the combination of acupuncture and chiropractic particularly powerful. “Acupuncture is a way to direct care to the body where it’s needed,” she explained. “Chiropractic gives you valuable information, but that is augmented by the acupuncture evaluation, which looks at the pulse and tongue signs—it adds another dimension of diagnosis.”

Dr. Burke’s first love, however, will always be chiropractic. She first became fascinated with the profession as a child growing up in a small New Jersey town, where the medical doctor and chiropractor practiced next door to one another, referring patients among them. She also saw firsthand how chiropractic could help patients—her mother’s migraines and her brother’s neck injury from a water ski accident were both helped by chiropractic.

“It’s a way to treat patients without the harm that can sometimes come from surgical procedures,” Dr. Burke said. “It’s nice to be able to help patients explore chiropractic, acupuncture and other modalities before they rush into surgery.”

Dr. Burke considers it her mission to spread awareness of chiropractic. Throughout her 25-year career as a tennis player, she often spoke to other players about her practice and what chiropractic can do. “I traveled all over the country to play tournaments and regularly came across people from different walks of life,” she says. “I found a lot of people didn’t really know what we do, but they’re amazed once I tell them.” When she came across players with a shoulder or wrist injury, she’d sometimes treat them. Her reputation grew to the point where she was even once pulled off the court to help an injured player.

In addition to continuing her work at her practice, Dr. Burke is helping Logan find an instructor for its advanced acupuncture courses. Her career, she said, has been a satisfying one. “If I could go back and do anything I wanted, I wouldn’t change a thing,” she said.