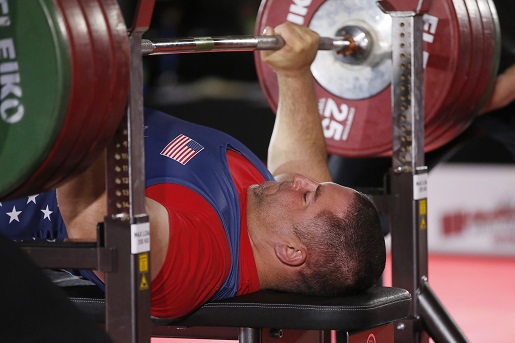 It’s been a busy year of competition for the USA Para Powerlifting (USAPP) team after all international sports competitions were put on hold and delayed in 2020 due to the pandemic. Jake Schrom, a member of the USAPP team, finished in fifth place and reached a new personal best at the June World Cup in Dubai.

“This competition was more about the weight I lifted than where I placed. I was able to increase my weight by 10Kg,” Jake said. “The venue was incredible, and it was great competition in the build up to the Paralympics.”

After placing in fifth at the world cup and finishing the year ranked 10th overall in the world for his weight class, Jake received the news that he has been offered a Bipartite Invitation to the Tokyo 2020 Paralympic Games.

“I’m very excited to have received the call for Tokyo and I cannot wait to represent Team USA,” Jake said.  “I’m very thankful for my family, teammates, coaches and support staff for always believing in me and that I can finally call myself a Paralympian.”

So far this year, Jake has competed in two World Cups, the first in Manchester and the second in Dubai. Although these competitions hosted athletes and spectators from all over the world, this will be his first Paralympic run on the world’s biggest stage. Nonetheless, Jake doesn’t let this pressure get to him. Instead, he focuses on the mental performance of the sport, so that he can lift on the world stage without getting nervous.

“Before an event, I visualize the venue, the platform and the judges to create an image in my mind,” Jake said. “It takes the nerves off the actual competition day because I already imagined it, so I’m able to channel the nerves in a good way without letting them affect me.”

The physical component to sports is the first thing people think of when they think about an athlete’s ability, but team USAPP prides itself on putting a focus on mental performance as well, which people don’t often consider.

“You can be the top bench presser in the world, but if you can’t handle the pressure of the venue, then you won’t perform the best,” said Mary Hodge, USAPP’s high performance manager.

Along with having a mental performance coach, USAPP athletes are able to secure valuable treatments and resources from Logan University. From dietetics to chiropractic care, Logan’s supports as home to USAPP have proven to be very impactful. Thanks to these resources, supports and tremendous amounts of training, Jake was able to lift 207Kg during his opening attempt in Dubai.

“He looked great, and I felt all of his gears were in place for him to be successful,” Mary said. “To knock it out of the park like that on his first attempt was incredible to watch him do so well.”

Now, Jake has his eyes and training set on Tokyo while the rest of the USAPP team are focused on Paris 2024. The second domestic qualifier for Paris, the 2022 World Para Powerlifting Americas Open Championships, is going to be held on USAPP’s home turf, Logan University, in July 2022.

“As high performance manager, my job is to ensure that we’re always looking ahead for the future of para powerlifting.” Mary said. “I’m not leaving anything on the table in terms of opportunities for us as a sport.”