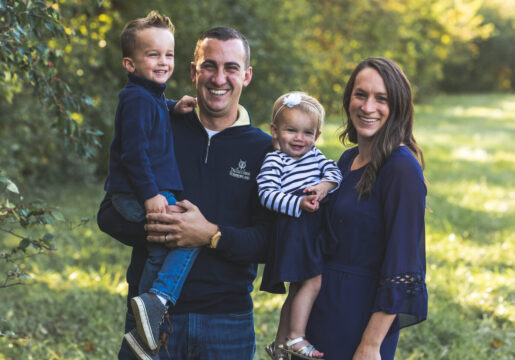 When Kate Bruce, DC (’15) sustained a hamstring injury playing soccer during her junior year of high school, she had no idea it would lead to a successful chiropractic career.

“After I was injured, I saw my primary care physician and went through physical therapy, but I wasn’t feeling any better,” Dr. Bruce said.

Determined to heal her injury, she went to see a family friend who had recently opened a chiropractic business in Columbus, Ohio. She found relief almost immediately.

“After one or two treatments, I felt great,” Dr. Bruce said. “Eventually, I started talking with the chiropractor about her job, and that’s when I decided what I wanted to do.”

In August 2012, Dr. Bruce left her hometown of Lancaster, Ohio, to start her first trimester at Logan University. “I chose Logan because I liked the intimate campus environment and small class sizes,” Dr. Bruce said. “The University also has some of the best professors in the field who are committed to giving hands-on training and real-world experiences.”

After she graduated from Logan, she and her husband, Justin, moved back to Lancaster with the dream of starting their own chiropractic business. “When Justin and I got married during my second trimester, we knew our ultimate goal was to open a business in our hometown,” Dr. Bruce said. “Justin helped by writing the business plans while I was in school so that we could hit the ground running.”

In March 2016, the pair opened Bruce Chiropractic and began building their practice from the ground up. “Because we were starting from scratch, it was nice to have the support of the people in our community who we’ve known for years,” Dr. Bruce said. “Our families and friends as well as medical doctors we built relationships with helped us get referrals. It’s all snowballed from there.”

Since opening four years ago, the couple has more than quadrupled their patient base. Currently, Justin handles the business side of the practice so Dr. Bruce can focus on providing chiropractic care to people of all ages, from newborn babies to older patients in their 90s. She has even treated entire families.

“I treated a mother who had a lot of stressors at home that were affecting her body,” Dr. Bruce said. “After getting to know her better, I learned she had a 1-year-old baby who had a lot of trouble sleeping. It was keeping her and her family up at night, so I suggested that she get her son adjusted. After only three visits, he was sleeping through the night. The treatment changed their lives by helping all of them get a good night’s sleep.”

Although Dr. Bruce helps patients with a range of ailments, including low back pain, neck pain and headaches, she has had a passion for treating pregnant women ever since she experienced the benefits of chiropractic care during her own pregnancy.

“I was pregnant while earning my DC at Logan, so I was lucky enough to go to the clinic and get adjusted on a weekly basis,” Dr. Bruce said. “This helped me realize how vital chiropractic care is for expecting mothers and their babies.”

In order to serve pregnant women at her practice, Dr. Bruce earned her certification in the Webster Technique, which supports a more comfortable, safer and easier birth. Then, she met with OB-GYNs in Lancaster to explain how the technique can aid their patients.

“Learning about the Webster Technique was eye-opening for the OB-GYNs I met with,” Dr. Bruce said. “Now that they understand the safety and effectiveness of this type of chiropractic care and have a Webster-certified chiropractor to refer their patients to, we’ve been able to work together to make a difference in the lives of many mothers and their babies.”

Dr. Bruce said her next goal is to hire a physical therapy assistant so the practice can serve even more patients. “Justin and I have a true passion for this town,” Dr. Bruce said. “We want to help as many people as we can.”