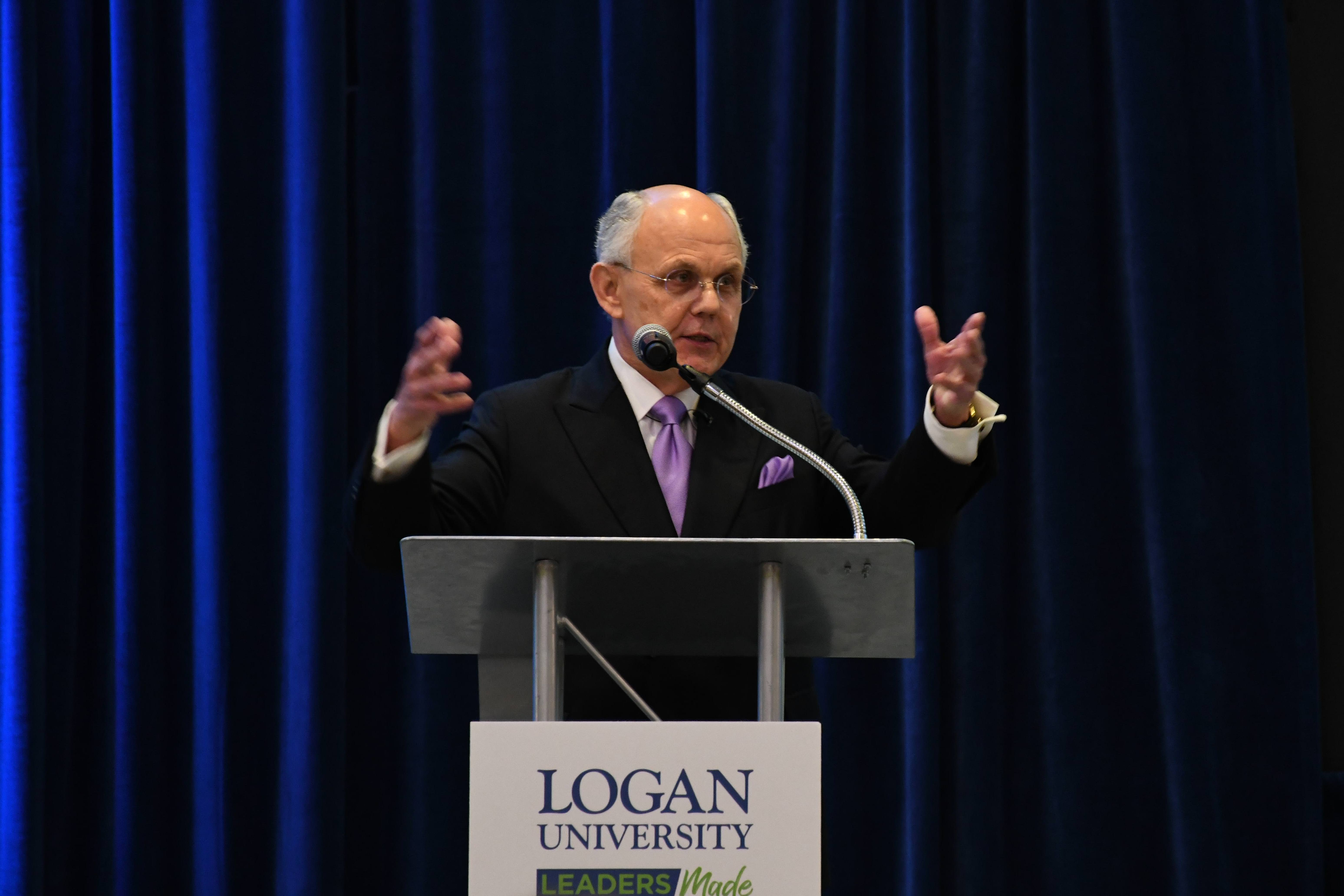 “There’s never been a time of greater cultural authority for chiropractic.” That’s the message Carl Cleveland III, DC delivered during his presentation at the 2019 Logan University Spring Symposium.

Dr. Cleveland is President of Cleveland University in Kansas City, which was founded by his grandfather, Carl Cleveland, DC. He is also an author, educator and international lecturer. Generations of his family have been pioneers in chiropractic, giving him a unique perspective on just how far the profession has come in terms of public acceptance.

It all started with Dr. Cleveland’s great-grandmother, Sylva Ashworth. Sylva was born in Lincoln, Nebraska, in 1874, 26 years before chiropractic was founded. By the time she was 27, she suffered from cardiovascular problems and severe diabetes that caused an infection in her foot. Surgeons didn’t think she could survive the amputation and predicted she’d live only a few more months. Thankfully, a neighbor suggested Sylva try chiropractic. “Over time, her gangrenous toes pinkened up and the diabetes left her,” Dr. Cleveland said. “Not long after, she packed up her children and moved to Davenport, Iowa, to enroll in Palmer College of Chiropractic.”

Sylva’s daughter Ruth followed in her mother’s footsteps. Ruth met her husband Carl Cleveland while both were students at the Palmer School of Chiropractic. The couple eventually moved to Kansas City and founded Central College of Chiropractic in 1922. The school was run out of their home. Chiropractic wouldn’t be legal in Missouri for another five years. Their son, Dr. Cleveland’s father, grew up afraid that his parents could be arrested at any moment. They escaped arrest—many of their students did not—but it was nevertheless a curious home to grow up in, with the kitchen serving as the dissection lab.

Although chiropractic was legal by the time Dr. Cleveland came along, the public still largely misunderstood it or—worse—thought of DCs as “quacks,” Dr. Cleveland recalls. Chiropractic has come a long way since then. “Today my grandchildren won’t hear words of disrespect about what we do,” Dr. Cleveland said.

Indicators of chiropractic’s cultural authority include:

This increase in visibility and trust is due to a few different factors. One big reason is that chiropractic succeeds in all three goals laid out by the triple aim of the Affordable Care Act: improved care experience, reduced health care costs and improved health care outcomes. Numerous studies prove chiropractic’s efficacy in each area. Chiropractic patients seeking treatment for back pain tend to rate their satisfaction higher when compared to medical patients. A 2017 Consumer Reports study showed that 95{8b9901aebceb0a3eec0a79b3f3654469c0b087e871156feadcbd77a99af0e60d} of back pain patients find effective relief from chiropractic. Studies have demonstrated the significant cost benefits of sending patients to a chiropractor as a first line of defense against back and neck pain.

Dr. Cleveland concluded his presentation with a call for the chiropractic community to cultivate a wider understanding of chiropractic care and prepare future DCs to work within a multidisciplinary environment.